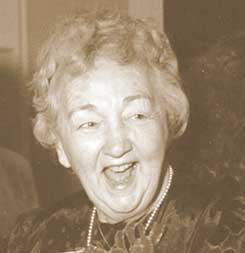 On January 30, 2007 the Northern Nevada Women Lawyers Association, in conjunction with the Washoe County Courthouse Historical Society, honored the life and work of Charlotte Hunter Arley, a pioneer Nevada woman attorney. A plaque how hangs in the historic courtroom where her most famous case was tried. The “Petticoat Trial” began on June 2, 1952 in Judge John S. Belford’s courtroom. The press dubbed it the “Petticoat Trial” because for the first time in Washoe County both opposing attorneys were women. It could also easily have been called “the virgin trial” because it was the first jury trial for Charlotte and her opponent Nada Novacovich and for Judge Belford as well. Charlotte prevailed and her client was awarded $3,000.00.

Over the twenty years that Charlotte and I were friends, we had many conversations about this trial, her life and her long legal career which she began at the ripe old age of 16 when she entered Northeastern Law School in Boston. She became a lawyer because her father gave her the choice of law or dentistry and she couldn’t see herself pulling teeth. She had to wait until 1935 to take the Massachusett’s Bar because she wasn’t old enough when she graduated from law school.
Charlotte was a hard worker and never considered any job beneath her. There were times when she worked 2 or 3 jobs. She always had great confidence in her own ability to work hard and to take care of herself. Whenever she was treated unfairly in her profession because she was a woman, she shrugged it off with the explanation that that’s the way things were in those days.” She then left that situation and went on to something new. Charlotte had a great sense of humor and a real zest for life. Her love of travel brought her West and she worked in the gift shop at Yosemite during the summers of 1936 and 1937. She then traveled to Canada, Alaska, and finally Hawaii where she married for the first time. Whenever I would ask her about her husband, Max, she would avoid talking about him and say, “what can I tell you about him? He was a saxophone player. That’s all you need to know.” Her father had come to Reno to get a divorce from her mother and Charlotte joined him here. She left Hawaii on one of the last boats out before the war.

She didn’t plan on practicing law in Nevada when she came to Reno, but she changed her mind and passed the Nevada Bar. She was admitted to practice in 1947. There were three women who passed the Nevada bar that year. Charlotte, Nellie Price and Emilie Wanderer of Las Vegas. Charlotte took on an assortment of divorce, personal injury, and criminal cases over the years. Several of these cases were appealed to the Nevada Supreme Court and Charlotte won her share. She assured me that she “always represented the Plaintiffs because they were the people who needed her the most.” To Charlotte, being a lawyer was all about justice and doing the right thing and providing a service to people. Although she did well financially over the years, she always claimed that it was “never about the money.” She never had fee agreements with her clients, but they usually paid her eventually when they could afford it.

In Reno she met and married Jacques Arley, the love of her life. She thought that he was very handsome and she loved the fact that he had been in the French Resistance during the war. Charlotte and Jacques lived in Portland, Oregon for about fifteen years because of his work. After Jacques’ death, Charlotte moved back to Reno and resumed her practice.

In 1989 the Northern Nevada Women Lawyers began honoring outstanding women attorneys in the community. Charlotte was the unanimous choice to be the first woman so honored. She continued to serve her clients until she was well in to her eighties. The clerks working behind the counter at the courthouse filing office remember her coming in with her clients and if they couldn’t afford the filing fees or occasionally a marriage license fee, Charlotte paid the fees herself. After all, being a lawyer was all about service to people who needed you and service to the legal profession. Charlotte Hunter Arley died on March 7, 2006, just shy of her 94th birthday.

Charlotte was a credit to her profession and contribute so much to the Reno legal community. The community recognized those long years of dedication and service when they presented a memorial service in her honor which featured a reenactment of the “Petticoat Trial”.

Researched and written by Kathleen Noneman