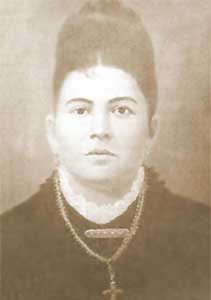 Fermina Sarras was a figure who invariably intrigued the newspaper reporters, the petite Hispanic woman who went prospecting alone in the central Nevada desert and wore pants –a shocker. Mining had always been a man’s world that the woman on her own did not dare enter. Fermina endured plenty of good natured teasing about the rich mines she said she had discovered. Little did people know that she was right.

She was born in Nicaragua in July, 1840, possibly of aristocratic origins. Her first husband was apparently Pablo Flores, the father of her four daughters. He made several trips between Nicaragua and the U.S., and finally in 1867 Fermina accompanied him with her daughters. Her name turns up in the press, but soon his does not, suggesting that he died or she lost interest in him. The surnames of two of her younger children (Frank Mason, born in 1878, and Joseph Marshall, born in 1881) are not Flores.

Fermina was attracted to the booming Comstock, where she quickly became a well-known character, but she did not linger. Placing her two youngest daughters in an orphanage, she chose a newer camp, Belleville, in the central part of the Nevada desert to the southeast. Her first mining claims in the record books were the Amant and the Central American in 1888. Many more would follow.

After 1900 rich discoveries at Tonopah and Goldfield transformed Nevada’s mining landscape. Investors scoured the state, hoping to cash in on the next bonanza. Fermina’s claims attracted attention. Her first sale came in June 1902 when investors bonded 25 of her copper claims at $8,000 each. Fermina became a regional celebrity and acquired the new appellation as Nevada’s Copper Queen. She was the pioneer who had shown the way for women in mining who would follow.

In August 1905, when Tonopah & Goldfield railroad officials decided to create a passenger and freight terminal north of Belleville in the Soda Spring Valley, they decided to name it after Fermina. So it was that the town of Mina (the common version of Fermina) suddenly appeared on the map. A month later headlines announced the sale of the “Famous Sarras group of 40 claims” for $90,000. In 1907 Fermina sold another group of claims for $65,000. A smelter was built in 1912 northwest of these properties. Ores in her claims proved valuable but not extensive. Production in the Santa Fe District from 1906 to 1920 is estimated at $2.5 million.

However, like Fermina, some of her properties showed staying power. Between 1988 and 1996, at Giroux Canyon in the Gabbs Valley Range, Corona Gold and then Homestake Mining produced a combined 299,000 ounces of gold and 644,000 ounces of silver on ground once owned by Fermina Sarras. Typically she would insist on payment in gold, sensibly mistrusting the banks that often failed. She would then stash the gold in her chicken house because she said the chickens always make a fuss if someone approached.

Probably her gold did not stay in the chicken house very long. Known for her generosity, she turned no one in need away from her door; she knew how to celebrate the big sale. In the words of her great grandson, Albert Bradshaw, she would go to San Francisco and “dine and wine and everything, just right up to the first class “. . .pretty soon the money was dwindling pretty fast, so Fermina would say, “I guess I better get back to the desert.” She’d come back . . .and don her overalls and take to the hills again and find another mine.

Fermina Sarras died in 1915, leaving strict instructions in her will. If any of her executors failed to work her mining property, they forfeited any right to her estate. She also left a large and flourishing American family and a portrait in which she is very much the Spanish lady.

Researched and written by Sally Zanjani. Uploaded to the website in March 2016.