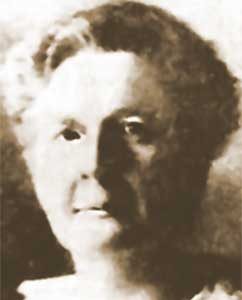 Biography Miss Helen Rulison had the honor of being Nevada’s first female dentist when she joined her brother David in his dentistry practice at Reno in 1899. Three members of the Rulison family, David, Helen, and Fred, were among Nevada’s first professionally trained dentists, and their offices were to be found in Reno for over fifty years. Only when she reached her seventy-sixth year did Helen finally retire from the profession she had practiced in San Francisco, Reno, Goldfield, and Tonopah, and to which she had devoted forty-nine years of her life.

Born Helen Mullen Rulison on July 23, 1870, this “pioneer” woman’s story began at the Keystone Mill near Dayton. Her father, Charles Henry, mother, Ellen Mullen, and oldest brother, Charles James (b. 1861), were early pioneers of a different sort who had left Huntley Grove, Illinois, and crossed the “Great American Desert” in the spring and summer of 1863 bound for the Comstock. Over the years three more boys, Helen, and another girl were added to the Rulison family of six children.

“Nellie”, as Helen was known in her youth, received most of her education in the Dayton schools. Her father had moved back to Silver City in the late 1870s, only to return to the Lyon County seat a few years later. Unfortunately for this young girl, who consistently received the highest scores in her class, the ever-deepening Comstock mining depression had severely affected her father’s occupation as a millwright which prompted him to move his family to Reno on February 16, 1888, half-way through Nellie’s senior year in high school. Despite the rather abrupt transition in her life, Nellie graduated from Reno High School in June at the top of her class. In September she enrolled in the University of Nevada’s School of Business and graduated that academic year on June 13, 1889.

Like many young women in the latter nineteenth-century, Nellie chose one of the few vocations then open to females. She would be a teacher. January 1890 saw Nellie instructing thirty-seven students at the South Side School across the Truckee River from Reno. Sixty-five dollars per month must have seemed like a great deal of money for a young woman of nineteen, and her “fortunes” were to increase the next academic year. While teaching third grade at Reno’s elementary school, Nellie’s monthly salary had increased to seventy dollars. In June 1892, after having taught fourth grade for one year, Nellie apparently had enough of the pedagogical profession.

Impressed by her brother’s success as a dentist, Helen followed in his footsteps in 1894, moved to San Francisco, and enrolled at the University of California. Two years later, there were two dentists in the Rulison family, David practicing in Reno, and Helen in San Francisco while her younger brother Frederick attended California Dental College. A new Nevada State Board of Dental Examiners was appointed on April 10, 1905 which included, among others, Helen Rulison. Helen found her career had been given a considerable boost with her membership on the board.

Reno, Tonopah, and Goldfield were swept up in a mining boom in the first years of the twentieth century. The smaller community of Reno included a total of twenty dentists, while more populous Goldfield had only thirteen. This discrepancy caused Helen to look southward for improved opportunities. Late in 1906, Helen boarded the south-bound Southern Pacific train for Esmeralda County’s golden mecca. She hung out her shingle at the San Jose Hotel – soon to be renamed the Gray-Craig Hotel – in November 1906. She advertised in the local newspapers that crown and bridge work were her specialties. While living there she speculated on the Goldfield stock market in hopes of instant wealth. Although she made no fortune, apparently Helen did well with her investments.

Helen saw the handwriting on the wall when a few years later Goldfield’s decline began. By 1912, she had moved to Goldfield’s sister town some thirty miles to the north. Tonopah’s population had stabilized, and so had its silver mining industry. She had determined that the Nye County seat could support another dentist. For fourteen years, her office would be located in the State Bank Building at the corner of Main and Brougher streets in downtown Tonopah.

Surprising most Tonopah residents, at age forty-five, Helen married Robert H. Shipley, a Tonopah millman, in Reno on July 19, 1916. She had lost her mother in 1915, followed by the death of her brother David a little over a year later. When her father passed away at age 90 in April 1926, plus the fact that Tonopah’s economy was on the wane by the mid-twenties, Helen was motivated to return to Reno.

Opening an office at 126 Ridge Street, Helen quietly practiced her profession until she retired at seventy-six. Death took Helen on June 6, 1955 at the Twaddle Rest Home in Reno. No male had been born to carry on the Rulison family name, thus Nevada not only lost its first female dentist and a pioneer woman, but also a pioneer family who had been fortunate enough to realize the “American Dream.”

Researched and written by Guy Rocha. Condensed by Kay Sanders. Posted to the Web site January 2010.