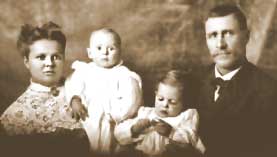 Kathryn L. Marbaker was born near Stevensville in Bradford County, Pennsylvania, on November 15, 1886 (or 1985) to Edward Marbaker Jr, born in 1847 and Almeda Wage, also born in 1847. Her middle name was either Luella or Lucille–her father called her by one name and her mother by the other. She was also known as as Kittie or Kitty (spelling varies). Her father was a farmer and had served in the Union Army during the Civil War. Edward and Almeda were married about 1865, and by the time the 1880 census was taken they already had eight children. By 1900, Almeda and Edward Marbaker appear to have been divorced. Almeda then married a man named Russel Gibbs. By 1910 Edward Marbaker had also remarried, to a much younger woman named Lulu.

Kittie had at least some elementary education and was able to read and write. She did not appear to be living at home with either parent by 1900, when she was fourteen years old, and may have been at school or employed elsewhere. Family legend tells that at about the age of sixteen, Kittie left home and advertised herself in a Philadelphia newspaper as a mail-order bride. Thirty-four-year-old Robert (Bob) M.Tubb (11-15-1868 – 4-24-1944) responded to the ad and the couple were married around 1904. He was a freighter from Texas passing through Pennsylvania.

It is not known where Kittie and Bob Tubb first settled. Their first two children, Leon (1905-1979) and Robert (1906-1980), were born in Crown King, Arizona (Territory). Bob had apparently been running freight lines from Crown King to Las Vegas. On a layover in Las Vegas he found a piece of property to the northwest that appealed to him, and the small family headed west in a covered wagon, arriving in the Ash Meadows, Nevada/Death Valley Junction, California, area about 1907.

Although the “Lila C” borate deposit had been discovered near Death Valley in 1882, it was not mined until 1907 when the Tonopah and Tidewater Railroad (TTRR) built a seven-mile spur to the mine, making ore transport financially feasible. Bob Tubb filed a homestead claim on the land between the mainline and the spur at Death Valley Junction (south of the present town) and built a saloon, grocery store, hotel, and brothel. Living quarters for the family were just north, at the present town site. He worked hard and his businesses prospered. Kittie ran the store, served in the saloon, cooked for the boarding house residents, and took care of the women in the brothel.

In 1908, Kittie took the TTRR to Los Angeles to give birth to their third son, George (1908-1962). By 1909, Bob had planted fruit trees and grain on their 340 acres at the Junction. He ran a pipeline ten miles from Crystal Springs in Ash Meadows, Nevada (now a natural preserve/wildlife refuge) to supply water to his crops. Apparently the pipe broke that same year and he was unable to fix it in time to save the crops. Later he was forced to abandon the pipeline altogether as it was illegal to transport water over the state line unless it was free-flowing.

The fourth Tubb boy, Danny (1909-1941), was born prematurely under a tree at the Junction. Bob and Kittie were living in a tent house near where the present-day Amargosa Opera House building now stands. The new baby was quite small and Kittie is said to have kept him in a cigar box and fed him with an eyedropper. Always sickly and fussy, at the age of four Danny Tubb developed a paralysis thought to be due to polio and was crippled for the rest of his life.

In 1915, the “Lila C” played out and the Death Valley Railroad (DVRR) was built to provide a spur line to the Biddy mine four miles further. The ore concentrator at the old mine was brought to Death Valley Junction, houses were moved into the now lively mill town and additional structures were built. 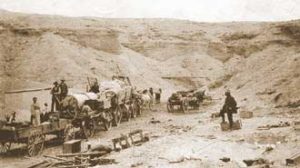 Bob Tubb established the first school in Death Valley Junction in 1915. One report claims that when the new, young, single teacher arrived in the Junction to take up residence in the quarters offered by the Tubbs, Kittie sent her packing because she didn’t belong in the rowdy brothel and saloon environment. Soon after, several factors caused the Tubb businesses to fail. Ironically, the newly appointed school authorities did not approve of the Tubbs running a brothel so near the school. By 1916 when Inyo County went “dry,” Tubb had closed his saloon and brothel and moved them over to Ash Meadows. He continued to hold a claim to his property at the Junction and still operated a business there until the borax company bought him out in around 1923. Kittie took up ranching in Ash Meadows and continued to ranch and farm there on and off until her death in 1957. Kittie and Bob Tubb would eventually divorce and marry other people, but continued to live in close proximity.

Kittie earned the nickname “Shotgun Kittie” because she never went anywhere without her shotgun. It was always within reach–in the house, in the car, or in the outhouse, and she even carried it with her into the bars in Beatty, where no one challenged her. She was apparently an excellent shot and legend has it that she once waited for three geese (another version says five) to line up just right and then nipped their heads off with a single shot.

On one occasion, two burglars are reported to have come onto Kittie’s property in Ash Meadows to steal something, and Kittie shot one of them in the leg and captured the other, tying them both up. She apparently took them water, but wouldn’t waste any food on them until someone came from Tonopah with a wagon to take them to jail. At night, visitors out looking for frogs sometimes followed a ditch from the nearby Ash Meadows tourist lodge. Kittie could hear them coming and knew exactly where the ditch crossed onto her property and they would be frogging on her land. At that point, she started shooting at them in the dark.

The shotgun was also an essential part of dinner preparations. One visitor, reportedly a game warden from Pahrump, was sitting on the porch with Kittie. She gave him a choice of duck, goose or chicken, for dinner. When he didn’t reply immediately, she declared, “Well, all right, we’re having goose!” BAM! She picked a goose off the nearby lake, the dog retrieved it, and Kittie plucked and gutted the bird right on the porch without ever leaving her chair.

Kittie married again several times after her divorce from Bob Tubb, but the marriages did not last long. Her second husband was named Jesse Wiley and the third, Charlie Kilgore, but although Kittie used the names of her husbands briefly, she always went back to calling herself Kittie Tubb when the marriages were over.

Kittie worked as a cook in various hotels and cafes from Death Valley Junction to Beatty, Nevada. She also raised horses on her ranch at Ash Meadows, Nevada. In her later years, she became something of a tourist attraction because visitors to the nearby brothel or the tourists from Death Valley Junction would stop and talk with her as she sat on her front porch. Many also wrote to her, sending postcards from their homes all addressed to “Shotgun Kittie.”

Besides having a violent temper, Kittie was reported to be very observant and vigilant woman, always checking out the area around her car, and frequently finding coins, once even a diamond ring. She was said to be a very spiritual person, although she did not follow any organized religion. She also had her own system of medical remedies that included liberal use of topical kerosene for wounds and urine for superficial skin conditions.

Throughout her life Kittie was very overweight, but always was able to move rapidly when necessary. She also had a reputation for emptying a considerable number of liquor bottles into herself. At the end, she succumbed to complications of her obesity (280 pounds on a 4′ 11″ frame). She became quite ill during a severe flood, and had to be taken to the hospital in Tonopah where she died on March 20, 1957. She was buried in the cemetery in Tonopah alongside Robert Tubb Sr., her sons Danny and Robert Jr., and two great-grandchildren.

The Tubb home and family heirlooms were all burned to the ground in the early 1970’s. Little survived the fire, but the family still has a few old photographs and plenty of legends. The National Park Service finally purchased the Tubb property in 1997 as part of the newly created Ash Meadows Wildlife Refuge.