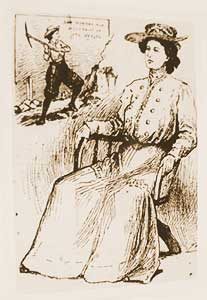 Lillian Malcolm was born in 1868, grew up in the eastern United States, and started a career as an actress on Broadway. But when gold fever struck the nation with the 1898 Klondike gold rush, Lillian packed up her show costumes and headed “North to Alaska.” That was the beginning of her new career as a prospector searching for gold mines. Although she was not the only woman who was struck with gold fever and went prospecting, which was considered strictly a man’s job at that time, she was one of very few women who did work in this field.

Alone, she took a sled and dog team over the treacherous Chilkoot trail to Dawson, a death-defying feat adventure she encountered. She also took a dip in the frozen Bering Sea while jumping between chunks of floating ice and came close to starvation when she ran out of provisions. She wore a pistol in her belt but was not able to fend off the men who jumped her claim in Alaska.

After a year in court battling to retrieve her claim, she left Alaska, completely broke but not discouraged. She continued to follow gold strikes for the rest of her life, always a little bit too late and never striking the big bonanza, and always aware that she was blazing a trail for other women to follow.

In her book, A Mine of Her Own, Sally Zanjani shares some of Lillian’s own words: “The grandest and healthiest life known is this rough pioneer life. And I don’t see why more women are not out in the hills. It ought to be as easy and natural for women to read rocks as it is for astronomers to read the stars. The day will come when they will not sneer at Miss Malcolm. They will not pick up their skirts when I come around. Disgusting conventionality must pay the penalty in any pioneer work….Woman can endure as much as a man. Comply with the law and you will have man’s responsibilities and man’s reward.”

From Alaska, Lillian traveled to Nevada to join the new gold and silver strikes at Goldfield and Tonopah in 1902. Since she had no money, she paid for her room and board along the way by telling the stories of her Alaskan adventures. She missed the heydays of the strikes at Goldfield and Tonopah, but while there she also tried to locate gold near Silver Peak in Esmeralda County. She staked a claim, went to Pittsburgh to raise money from eastern investors and formed a company called “Scotch Lassie Gold Mining Company.” When she returned, the Tonopah Bonanza reported her success in raising funds on November 2, 1907: “She is a hustler of no mean ability, and has done prospecting on her own account, both in Nevada and in Alaska.”Unfortunately, her Silver Peak claims did not pan out. The gold she was looking for was not there.

Lillian also lived for a time in Rhyolite, which served as a home base while she prospected in Death Valley. There she met Death Valley Scotty, an eccentric miner and scam artist. She took an option on a claim held by his partner Bill Key. When she became involved in defending Key against accusations that he was involved in a murder plot, she lost precious time and lost her option on his claim. When her Silver Peak property failed to show value, Lillian continued to travel in search of the gold she always believed she would find.

She spent some time in Mexico, then moved back to northern Nevada to work in the Slumbering Hills mining district. In 1911, she moved to Jarbidge in northeastern Nevada and continued her prospecting. Because Lillian had been scorned by other women and preferred the company of men, she told a newspaper reporter she had no close female companions. Some might have described her as having the “queen bee syndrome,” which meant that she saw other women as rivals rather than friends. Sometimes she prospected with men, and often she wandered the Nevada desert alone.

We do not know what happened to Lillian after she moved to Nevada’s rugged mountains around Jarbidge. She seemed to have disappeared, perhaps moving to another state or locating another stake to pay for her prospecting. While in Nevada, she attracted the attention of news reporters, because it was still unusual for women to choose prospecting as a career. She also voiced clearly her belief that women should be able to work as prospectors or in mining occupations. However, women were considered bad luck in underground mines, a barrier they were unable to break until the 1970s, more than 100 years after Lillian Malcolm’s birth.