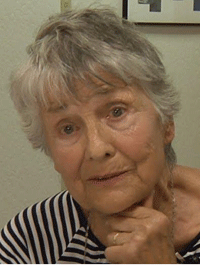 Anna, at age thirteen, was to graduate from eighth grade when her school was bombed. She recounts the rigors of living in Germany during and post WWII years (1939-1945). At the age of fourteen she went to work for the Americans at an “enlisted men’s club” for occupation soldiers. Those positions were highly sought after by German girls because that gave them access to food, a commodity very scarce in the general German population. Anna met her husband there, married at eighteen, and came to America on a troop ship in 1945. Her husband was from Eureka, so this German war bride wound up on a rural Eureka County ranch, speaking little English, and in a very foreign environment. Anna’s interview is important in that it replicates experiences many German war brides encountered, but who ultimately and fiercely adopted their new country. One of Anna’s proudest achievements was when she became an American Citizen.

Anna McKay was interviewed, May 5, 2017, by the Nevada Women’s History Project as part of the The Women of Nevada Highway 50 project. This video was funded by the John Ben Snow Memorial Trust.