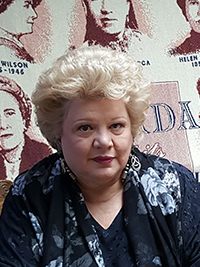 Born in Salem, Oreg., but raised in Nevada, Delora has attained a stellar career at the international level in opera.  She is known, worldwide, for her dramatic mezzo-soprano voice. After receiving both undergraduate and master’s degrees from UNR, Dolora went on to attend the Manhattan School of Music.  In 1982 she won the Bronze Medal at the 7th International Tchaikovsky Competition in Moscow. In addition to her current singing career, in 2006 Dolora created the Institute for Young Dramatic Voices to address the lack of training for large dramatic voices required for the great roles of the Verdi, Strauss and Wagner repertoire.  If that is not enough, she balances those two activities with composing. Her first composition was premiered in 2014. While not on the road, Dolora has a home in Reno, Nevada.

Dolora Zajick was interviewed on September 20, 2018, by the Nevada Women’s History Project through a grant from the Roxie and Azad Joseph Foundation.