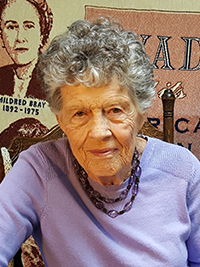 Diane, an early activist in the domestic violence movement, says she has always been involved in human issues. She was born in Montana but came to Nevada in 1967 when husband, Keith was hired as the UNR wrestling and assistant football coach. She has been a driving force behind the enactment of much Nevada legislation concerning domestic violence and other women’s and social issues. Diane was a founding member of the Nevada Women’s Lobby, Chairwoman of the Nevada Political Caucus, and in 1983, was named the first Executive Director of the Nevada Network against Domestic Violence. Diane was also appointed as the first Domestic Violence Victim’s Advocate in a prosecutor’s office in Nevada, under Reno City Attorney, Patricia Lynch in 1990.

Diane Loper was interviewed on October 5, 2018, by the Nevada Women’s History Project through a grant from the Roxie and Azad Joseph Foundation.