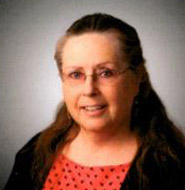 Mona will preside over Nevada’s 100th anniversary of women’s suffrage in 2014, as Chair of the Nevada Women’s History Project. She and husband Ron reside in Silver City, Nevada.

Mona Reno was the Nevada State Data Center Librarian and the Foundation Center Librarian, at the Nevada State Library from 1993-2009. Mona received her Master’s in Library Science from University of Arizona, Tucson in 1993. She is a member of Beta Phi Mu, the international honor society for library & information science and information technology. Mona holds a BA in Anthropology from Idaho State University, Pocatello. She worked as an archaeologist for many years both in New Mexico and in Nevada.

Mona received the Nevada Library Association’s “Joan Kerschner Leadership Pin” in 2005 for dedication and commitment to Librarianship and to Nevada.

While at the Nevada State Library and Archives Mona completed several publications.
-Nevada State Library and Archives, a statutory and administrative chronology, 1861-2001.
-Department of Cultural Affairs, a statutory and administrative chronology.
-Sarah Winnemucca: An Annotated Bibliography.
-The case of Sarah Winnemucca, special file 268: National Archives and Records correspondence during the Bannock Indian War, 1877-1885.

Mona was the content editor for Sarah Winnemucca: Scout, Activist, and Teacher by Natalie M. Rosinsky, by Compass Point Books. Mona also worked with Gwen Clancy on Three Centuries of Service a video history of the Nevada State Library and Archives, for the Exploring Nevada series. An earlier publication with her husband Ron Reno is Silver City, Nevada tombstone inventory.

Mona has recently completed the compilation and production of ”It Can Be Done” Nevada presents the Sarah Winnemucca statue to the people of the United States, a publication sponsored by the Nevada Women’s History Project.