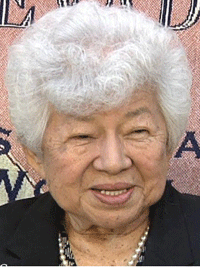 Florence was the thirteen-year-old daughter of Japanese immigrant parents living a typical American life at the start of WWII. Shortly after December 7, 1941, the family was uprooted from their Gilroy, California farm, taken to the local fairgrounds and then transported to a Japanese Internment camp in Poston, Arizona. Florence’s detailed story of WWII internment replicates the experiences of so many displaced Japanese-Americans of this period. After the war the family was bussed back to Gilroy, where they faced post war “Japanese” discrimination. Florence eventually became a cosmetologist, married and moved to, Nevada with her husband. They have lived in Carson City for over fifty years.

Florence Kozuye Nakashiki Suenaga was interviewed on November 9, 2017 by the Nevada Women’s History Project as part of the Women of Nevada Highway 50 project. This work was funded by the John Ben Snow Memorial Trust.