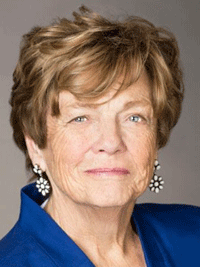 Tonopah native, Barbara Cavanaugh was attending high school in San Francisco when she received word that her home in Tonopah had burned to the ground. Her parents moved to Reno where Barbara graduated from the University of Nevada Reno with a bachelor’s degree and a then a master’s degree in Political Science. Now married, Barbara headed off to the University of Utah with her youngest child in tow, to obtain a PhD in Behavioral Health Communications. As Dr. Barbara Thornton, she taught ethics and communications for nearly 38 years and retired as faculty emeritus at the University of Nevada, Reno in 2005. Barbara has received both the Distinguished Faculty and Distinguished Nevadan awards. With her husband, they established the Thornton Peace Prize at University of Nevada Reno, and with her brother, John Cavanaugh, established the Cavanaugh Community Volunteer Award. Barbara is also a co-founder of the Nevada Women’s Fund.

Barbara Thornton was interviewed on August 16, 2017 by the Nevada Women’s History Project through a grant from the Robert Z. Hawkins Foundation.