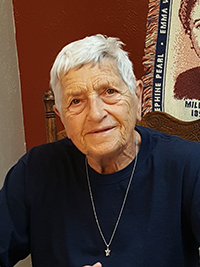 Born in Chicago. Ill. in 1929 at the start of the Depression, an interesting facet in Doris’ life was playing professional baseball for the Parichy Bloomer Girls baseball team; one of six professional women’s baseball teams that played in the Chicago centered National Girls Softball League (1944-1954). At the end of that “career,” she headed west to San Francisco, eventually finding work with the California Division of Mines and Geology in the drafting department. The love of her job spurred her to attend college night school classes in her chosen career of geography. With great perseverance, she finally received her bachelor’s degree in geography from the University of Nevada in 1972; some 30 years later.  In between those years she became the first female to be named a supervising draftsman for the State Lands Division in California. Dorismae moved to Nevada in 1968 and for the remainder of her career, in addition to completing her degree, engaged in geological related work. She is active in the local gay rights community and has served on several county advisory boards.

Dorismae Weber was interviewed on September 28, 2018, by the Nevada Women’s History Project through a grant from the Roxie and Azad Joseph Foundation.