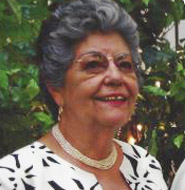 She was nominated by the NWHP North Region for her outstanding work as an organizer of tours, espinozalecture series, Nevada Day parade entries, and book sales. She served on the Sarah Winnemucca Statue Fundraising Committee. She has assisted with most of our conferences and this year she served as co-chair of the 2008 Biennial State Conference held in Carson City.

Her willingness to volunteer and take a leadership role in many of our projects is greatly appreciated by our membership. This award is one way that we, as a non-profit organization, can express our thanks for her dedication over the years.

A native of New Mexico, Isabel lives and works in Carson City and has one son, Brian. Currently she is legal secretary to an Administrative Law Judge in Carson City. Her educational accomplishments include graduating from the Sierra Nevada College with a Bachelor of Science Degree in Management Science.

Isabel was one of 63 women to be recognized at the event for the contributions they made to their community.